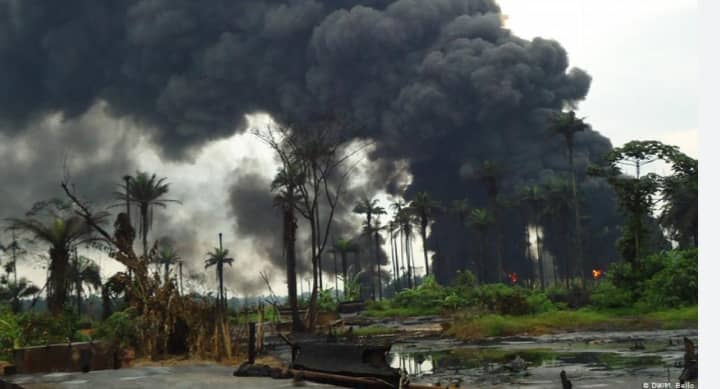 Decades of exposure to gas flaring by the foreign oil refineries in the Niger Delta has harmed the health of residents. The thick plumes of black smoke are their constant reminder of an industry that gives them nothing more.

As passengers travel along the Gbaramatu River in the Delta state of Nigeria, fireballs belch out of steel chimneys, lift up to the sky and cover it in huge plumes of smoke. This is an everyday reality for the many communities that live here. Niger Delta is rich in crude oil deposits and home to multinational companies including Shell. (A previous version of this article stated that BP is one of these companies. This has now been corrected. The department apologizes for the error.

Gas flaring has been a common practice for the refineries that operate here for decades. It is the burning of natural gases that come up as crude oil is extracted from the earth. It is done to speed up the process of extraction. But the smoke and dust gradually fall back to the ground, coating earth and water in slimy soot.

You can see this water is salty,” says Jerry Kingdom, a 25-year-old resident of the riverbank community of Batan. “We are drinking this water and it is not good for our skin or our body. Many of us, the children and the elders have been getting sick.

Communities on higher land in the Delta are affected too. In Utorogu there are more than 150 oil wells and a giant gas refinery meant to supply other countries in Africa. The residents complain that not only are they harmed by this project but also that there is nothing to gain from it.

“We have not benefited anything from these big oil companies,” says Benjamin Realda, a youth leader. “Look at the youth, there are no good jobs for them. We have skilled workers but there are no jobs.” Realda has finished his diploma and is looking for a job.

Despite its rich crude oil deposits, oil contributes to less than 10% of Nigeria’s gross domestic product. Foreign oil conglomerates take large portions of the profits to their own countries, according to Africa Check

Nigeria is the sixth largest exporter of crude oil in the world. Shell-BP was the first company to drill for oil in the Niger Delta in 1956. Today, 23 billion cubic meters of gas is flared in Nigeria alone each year, accounting for more than 13% of global gas flaring. This causes massive environmental damage due to the release of greenhouse gases.

Methane, a toxic gas, is released in large amounts. It also has a more potent heating effect on the environment than carbon dioxide. Flaring of methane during crude oil extraction converts it to carbon dioxide. This is why many oil refineries argue that gas flaring is the most environmentally friendly way to dispose of extra gases that they cannot sell.

It is, however, a substantial waste of energy resources when these natural gases could be used to power many neighboring villages. “There is no light in the community. There is no water, no good road, no hospital. We have been suffering. Look at the flare. Every day, we suffer from it,” said Realda.

Kingdom agrees with him. He is frustrated with the lack of educational facilities in the region. The only primary school is too ill-equipped to even have basic furniture.

Gas flaring spews particulate matter, soot, and toxins into the air. These are hazardous to humans. Health experts have already attributed the high frequency of respiratory and cancer problems in the Niger Delta to flaring from oil refineries.

Dr. Adogbeji Earnest Ideh, a doctor and former chairperson of the Nigeria Medical Association, told DW that the flaring of gas has made living in Niger Delta extremely difficult.

“People breathe in petroleum products and gas every morning, every afternoon, every evening. So that you now have quite a lot of upper respiratory tract infections, you now have people developing asthma and so many other lung diseases.”Various tests have confirmed that flaring is affecting fertility. “Men are beginning to develop what is called azoospermia. There are quite a lot of other ailments in the community, and we do not even have hospitals,” Ideh said.

Recently, the Nigerian government has taken new steps to reduce flaring. In 2019, a Nigerian Gas Flare Commercialisation Program was passed which aims to sell flare gas to third parties. This will help convert gases that are of no value to oil refineries into valuable energy resources.

Past regulations have also tried to accurately document the number of gases that are being flared on a day-to-day basis and to enforce stronger penalties on companies for flaring violations. But penalties are often too low to deter oil companies.

The people in Batan and Utorogu along the Gbaramatu River may have to wait a long time before these regulations begin to change their lives for the better.

The only solution to this Gas flare damage is to convert the Gas into Energy for our Isoko people to stop this dangerous pollution from our land. Everyone is subjected to Pollution and Hazardous chemicals. Our health is in danger our crops, Fish’s and animals are also exposed to danger Stop the Gas Flaring in Isoko and use it to Generate Electricity for the Host Communities.

This site uses Akismet to reduce spam. Learn how your comment data is processed.

Get to know other members and supporters of EPPI – Environmental Protection Promoters Initiative.